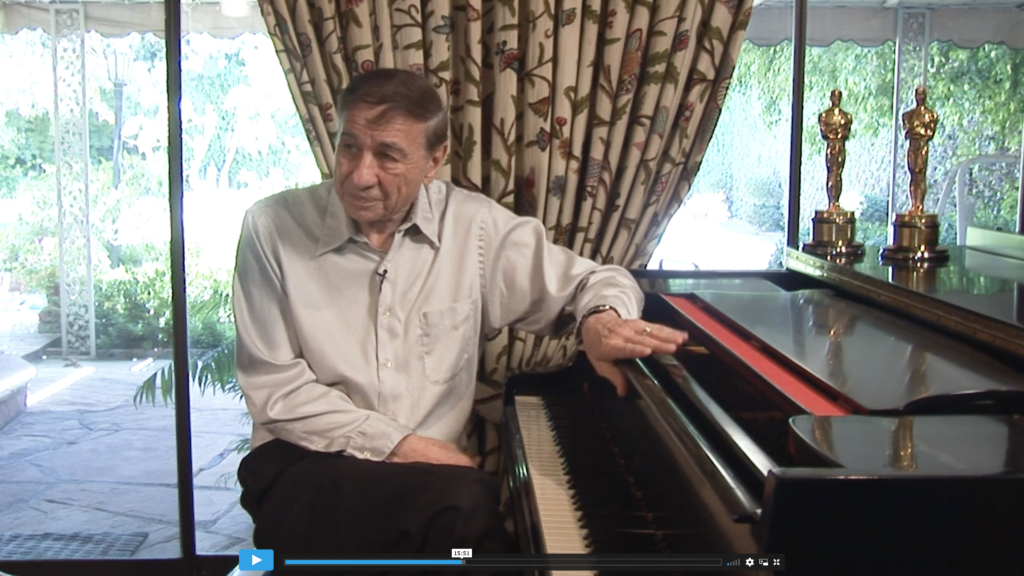 A Conversation with Richard Sherman

Richard Morton Sherman is an American songwriter who specialized in musical films with his brother Robert B. Sherman. According to the official Walt Disney Company website and independent fact checkers, “the Sherman brothers were responsible for more motion picture musical song scores than any other songwriting team in film history.”

Some of the Sherman brothers’ best known songs were incorporated into live action and animation musical films, including: Mary Poppins, The Happiest Millionaire, The Jungle Book, The Many Adventures of Winnie the Pooh, Chitty Chitty Bang Bang, Snoopy Come Home, Bedknobs and Broomsticks, The Slipper and the Rose, and Charlotte’s Web.

Their most well-known work, however, remains “It’s a Small World (After All),” composed for the theme park attraction of the same name. According to TIME magazine, it is the most performed song of all time.

Listen to the audio version

Let’s talk a little about music and the structure of music. Music is about emotion. Music is an abstract art. And as a songwriter, you’re sculpting time, and you are making time into something that’s going to touch our hearts; it’s going to reach us.

Well yes, we were actually Disney staff song writers for about, what 12 years, actually nine years under contract exclusively. And then we…we’ve been connected with Disney all through the many, many years. One of the biggest assignments we ever had was we were asked to be troubleshooters. We were asked to write a song for a pavilion that we were doing at the World’s Fair.

Yes. And it was the salute to the children of the world for UNICEF. And they had originally rigged up this wonderful ride. And in the ride, they were going to have these children of the world who were all in costume singing national anthems of the various countries. That sounds like a great idea. But in fact, it was not terribly good. It was horrible. It was cacophony. So, we were called in to write a simple song that would express the feeling, that children have the hope of the future.

I needed a simple song that was translatable. I wanted it to be simple, and yet, almost like a round. And we said a round would be kind of maddening, because it’s a 10-minute ride. How about a counterpoint that’s two pieces of music woven together? And he said, ‘Yeah. That’s what I said — a round.’

Basically, we came up with a simple song. And let’s set it all on the head of a pin. Okay, show us. Well, we didn’t want to say that children are the hope of the world. That sounds like preaching. So, we said, “It’s a small world after all, and the ‘after all,’ is the warning: Let’s not blow it. Let’s not destroy each other.

You are setting up like a vibration. And then you want your audience to be vibrating with you, right? And one of the things you’re doing is repetition.

It’s called the hook in pop. That’s a musical hook, and you get that little hook. And then you play with it, and you go with it. And it’s an instinct. Good songwriters do it; they just have a feel for it and they never realize why.

Well actually, I’m thinking of the audience. And I also think of pleasing myself. Bob and I would talk about it. A lot of discussion goes in before we start laying down notes and putting words together. It started with the thought, the idea. And our very thought was, we dug around and around ‘till we finally came up with this little, simple statement: ‘It’s a small world.’ And then we said, ‘after all,’ and that ‘after all’ was the hook. The whole thing came to us, and yeah, now we have a song now we have something and without the hook, it wouldn’t have meant anything.